In 2012, to commemorate the 100th anniversary of the acceptance of collage as a fine art medium, the Atlanta Collage Society conceived our first collaborative project. Under the leadership of the ACS, more than 60 artists, students and everyday Atlantans came together to create one large work of art — an eight-foot-square collage. The three-month endeavor was called The Marilyn Project. By overlaying a grid on a photocopy of Andy Warhol’s Marilyn, an axial map was generated as a guideline for colors, lines and shapes. The grid defined a pattern of squares that corresponded to 841 three-inch pixels. Individually, each collage pixel is a singular, complete work of art; collectively, they form a reinterpretation of an American icon. Additionally, The Marilyn Project is a dynamic statement about community collaboration.

With audience participation, the final project was assembled and displayed at the Museum of Design Atlanta (MODA). After her debut in 2012, Marilyn toured around Atlanta venues including: the Paideia School, Abernathy Arts Center, dk Gallery, the Seen Gallery, AIA storefronts project, the HIGH Museum, Gallery 72, and the Artist’s Atelier of Atlanta. After 5 years, Marilyn found her place in an art collector’s private home in Sandy Springs, Georgia, surrounded by other stunning works of art — a worthy end to her journey. 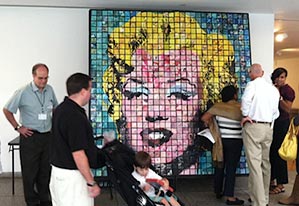 In 2013, the Atlanta Collage Society entered “Scarecrows in the Garden”, an annual event staged by the Atlanta Botanical Gardens. Our entry was titled “Calvin Collage,” which was assembled using collaged cardboard tube legs and arms, and hundreds of two-sided triangles hinged on a frame for the torso. Calvin provided a bright colorful spot in the garden and in the hearts of the members who labored over him. 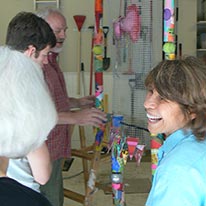 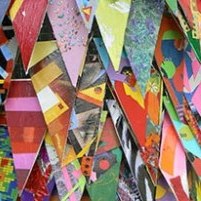 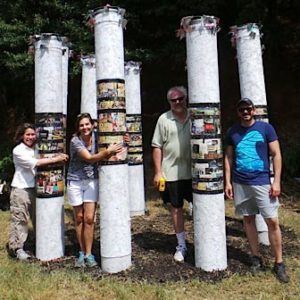 In the summer of 2014, the Atlanta Collage Society created our first project for “Art on the Beltline”.  For this project, we proposed an assemblage of nine columns that were 12 inches in diameter and 12 feet tall. The columns were arranged in a circle to create an archetypal “tempietto”. Each of these columns was collaged with symbols, words and images that related to the nine muses from Greek mythology, especially as the particular muse was represented by Atlanta’s art, literature, history and pop culture. As part of the project, ACS hosted a “hip hop” dance performance adjacent to the temple to highlight Terpsicore, the muse of dance.

The Atlanta Collage Society produced a show for Gallery L1 in the summer of 2015. The theme was the Atlanta Beltline and we used working QR codes to connect the viewer to blurbs about the BeltLine project and its impact on the surrounding neighborhoods. In all, nine working codes were created, eight 4’x4′ and one 8’x8′. Each code was comprised of 841 individually collaged squares. Countless hours were spent creating the individual squares. 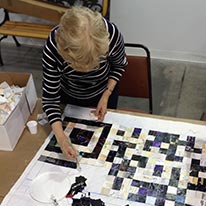 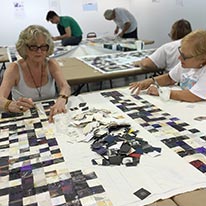 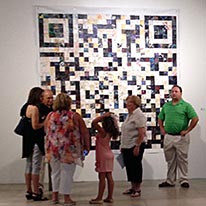 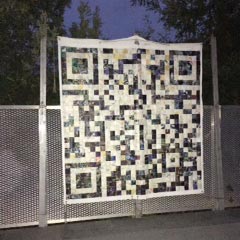 In the fall of 2017, seven of the pieces produced for the Gallery L1 show were repurposed, weatherproofed and hung outdoors as part of “Art on the Beltline” 2017.